Randy joined the Army once he turned 18, and he excelled. However, in his late 20's, everything changed. A terrible training accident fractured his spine and the state of medical technology at the time wasn't sophisticated enough to heal it. His time in the army ended.

But in 2014, his doctor approached him and told him that they could now perform a surgery that would fix his back. The doctor outlined what needed to be done and how long it would take, and Randy agreed to it.

Unfortunately, his job did not agree to hold a position for him while he recuperated from surgery. Randy was disappointed, but he wasn't too worried because he prepared and saved enough money to support himself during that time.

The time for surgery came around, and unexpected complications arose. Randy had to get a second, and then a third surgery, and spent the greater part of 2015 in the hospital. He was quickly running out of funds. In his own words, "Homelessness came out of the blue. Within a four week period I realized that hey, stuff is gonna hit the fan, this is not gonna end well."

He could feel the depression setting in, but kept himself motivated. He chose to keep pushing on, accept his position, and make the best out of it. 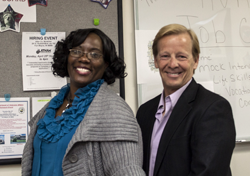 So in October 2015, after he left the hospital, Randy moved into Liberty Landing (our homeless veteran shelter in Fort Wayne). The very next day he met Clauzette, the program director of the Homeless Veteran Reintegration Program. Through this program, Randy set out to establish a career instead of just finding another job so he could get out and stay out of homelessness.

"Whenever I thought of a resource I needed or thought I needed, I would call Clauzette. And once I walked into the office and sat down, how can I help was always the first thing I heard. And knowing that I had that, was another safety net for me that helped me feel hopeful."


"I sat down and did a skills test here (at HVRP) about things that I know and things I can do. We also reviewed how my resume from previous experience can translate or transfer to a new situation or employment option. And after I took that, I got really focused and purpose driven towards those fine points instead of doing the shotgun blast of Wendy's, Burger King, Kroger."

Randy decided to mix his educational background in biology with his background in sales, and searched for a job as a pharmaceutical salesman. That's what he found! He is very excited to have a stable income and future ahead of him. and will always be an advocate for homeless veterans.

Will you be an advocate for homeless veterans like Randy? Donate today to help.