Thanks to you, Jevette found hope and peace. Now, she is giving back by volunteering to help other veterans.

Because of you, Jevette and other veterans found a home, a support system, and hope for a brighter future 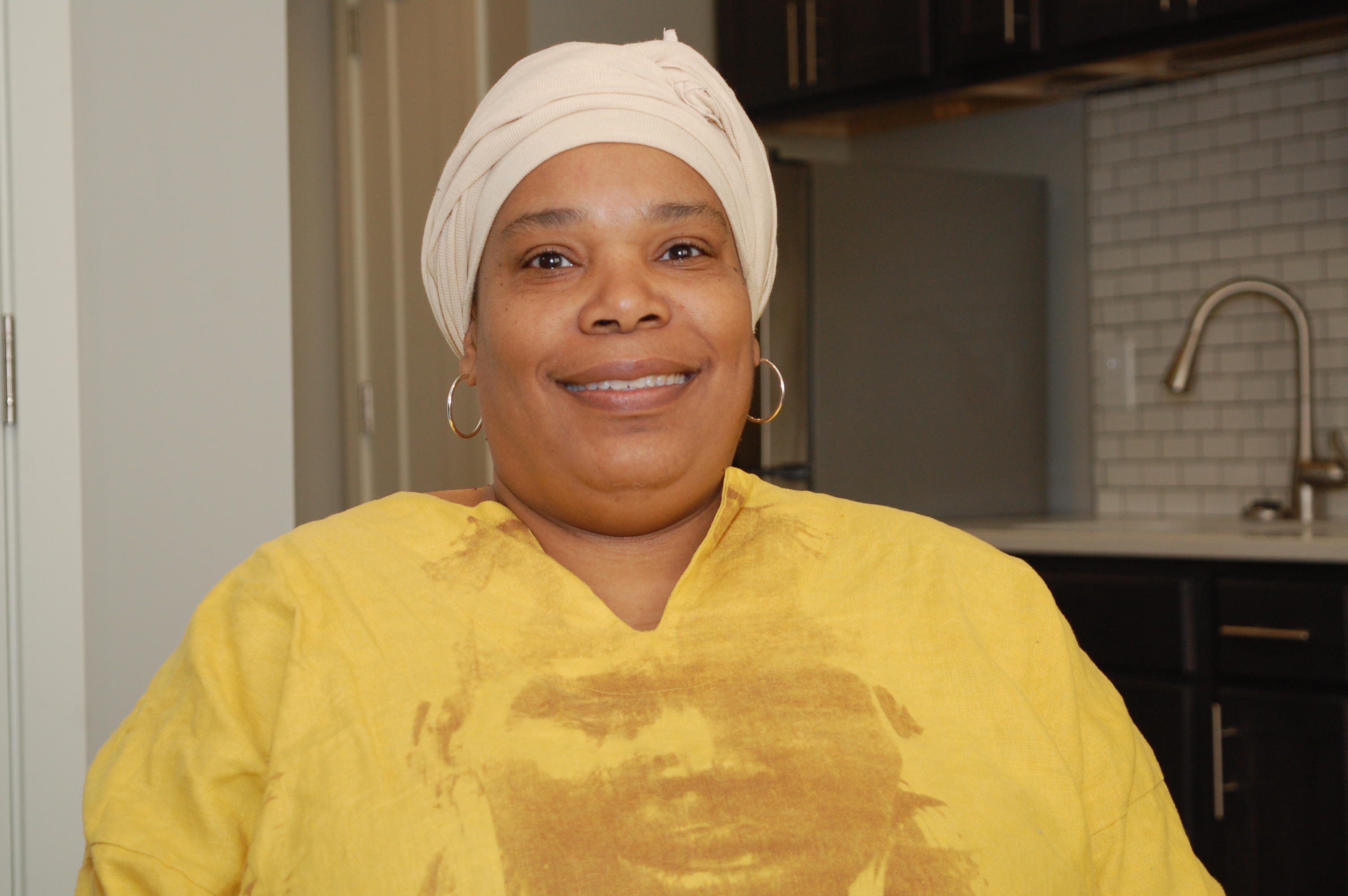 My name is Jevette and I am a U.S Navy Veteran.

I was born and raised in Cincinnati, in Lincoln Heights. When I was 21 years old I joined the Navy. You see my cousin was a Jag (Judge Advocate General) and I had dreams of being a lawyer and making a career in the military.

At 21 years old, I was the mother to a two year old little girl and wanted to give her a better life. I wanted us to see the world together.

So there I am 21 years old embarking on what I was hoping to be a long career in the Navy.

I was hopeful and excited for my future.

I admit at first it was a bit of a shock. Being on a ship is like its own unique city, except this one floats. It operates just like a city. We had our own police and fireman, our own versions of stores and churches and just like a city it is comprised of all types of people, good and bad.

I grew up fast in my six years in the Navy. There were parts of being a sailor that I absolutely loved. I loved traveling the world and seeing places I never imagined I would. I was proud that I had chosen to dedicate my life to serve others. The work I did was fulfilling. I felt like I was helping my country.

But for every good there is always another side. Being a woman in the military comes with its own unique experiences.

There was harassment and catcalling. I swallowed my pride and often ignored it. As I said I was in the Navy for six years but it was during my last two years of service that really changed my life. I was stationed on a ship in Scotland and I had a new assignment in the religious office as a Religious Program Specialist.

I should have known what I was walking into when the female officer I was replacing offered me some advice. She told me it would be much easier for me if I just gave in.

The thing is, I didn’t give in, and for the next two years my co-worker made sure that my time was anything but easy. Day in and day out I was faced with harassment. Things were very tense but I went in everyday and did my job. I was a sailor. This was going to be my career. I was dedicated and determined. Then one day instead of just harassing words he decided to touch me. I fought back.

I remember after it happened it was me who was called to the talk to the Captain. I had to explain my behavior. I told him what had been going on for years now. When he asked why I didn’t report it my answer was simple...

Who was I going to tell?

I was then sent back to work in the same office to work with the same man who assaulted me. Things did not get better, they only got worse. It was five months later that I was honorably discharged. This devastated me. You see my plan was to spend the next 20 years in the Navy. I wanted a military career. I wanted to take my daughter to see the world. I wanted to give her the world but I knew I had no option to stay.

So I came back home to Cincinnati. Well, at least physically I was home, emotionally and mentally I was still back on that ship.

I picked up my daughter and tried to move on the best way I could, because life had to go on. My daughter still needed her mother. The thing was I really couldn’t be there for her. Not like she needed me to.

At the time I had no idea what post-traumatic stress disorder or military sexual trauma was. I knew what I had gone through. I knew I was filled with a lot of anger and rage and I knew most days I couldn’t even get out of bed.

The next three years following my service was a blur of instability and what I now know was depression. After years of going through life but not really living I decided to finally take advantage of my educational benefit. I enrolled in school and began studying Bio Chemical Engineering Technology.

I wanted go into research. I was able to co-op a local company and soon receive a job offer. This job eventually took me to Detroit. Unfortunately while there I experienced some of the same behavior I had while I was in the Navy. I was the only woman on the floor and instead of addressing the issue they ended the contract with my company.

I moved back to Cincinnati and then to New York where I lived for the next 10 years.

By this time my daughter had grown up and had also joined the Navy. One day she called me and told me she was pregnant with my second granddaughter. I knew I couldn’t be the mother she needed when she was younger but I was doing better now and was determined to be there for her and my grandchildren.

Over the next eight years I helped care for my grandchildren and other children on the base. I joined a church and even started an outreach ministry for at risk youth.

Eventually I moved back to Cincinnati. I moved in with a friend which turned out to be a very unhealthy environment. It was while I was living with this friend that I discovered Volunteers of America.

I was walking down Hamilton Road one day and saw a sign that said Veterans Resource Center. I went in with the intention to volunteer but discovered that it was place that I could live and take time figure out what I was going to do next.

Two weeks later I was moving in to the VRC. I had helped others my entire life. It was time I started helping myself.

It was at Volunteers of America that I was finally able to address my experience in the Navy. I was able to give it the consideration it deserved. I attended classes and began accessing benefits I was always told I did not qualify for.

The help Volunteers of America has given me did not stop at the VRC. I was eventually able to move into Annabelle’s Place. I cannot tell you how amazing it is to have my own space.

I am excited about the future, not only about having this new space but about the possibility of creating a community of veterans like me, a place where we can support each other.

Though what I love most about my apartment is all of the light. It helps me with my depression. I can just pull the shade down and let the light pour in from the top of the window.

I still have bad days but I have come a long way.

I fill my days volunteering, working with the American Legion Post 644, one of the only all-female posts in the country in which I am the second vice and helping my daughter and granddaughters with their beauty care business.

I am even learning to play the guitar. I like the high cords, because those are the healing notes. 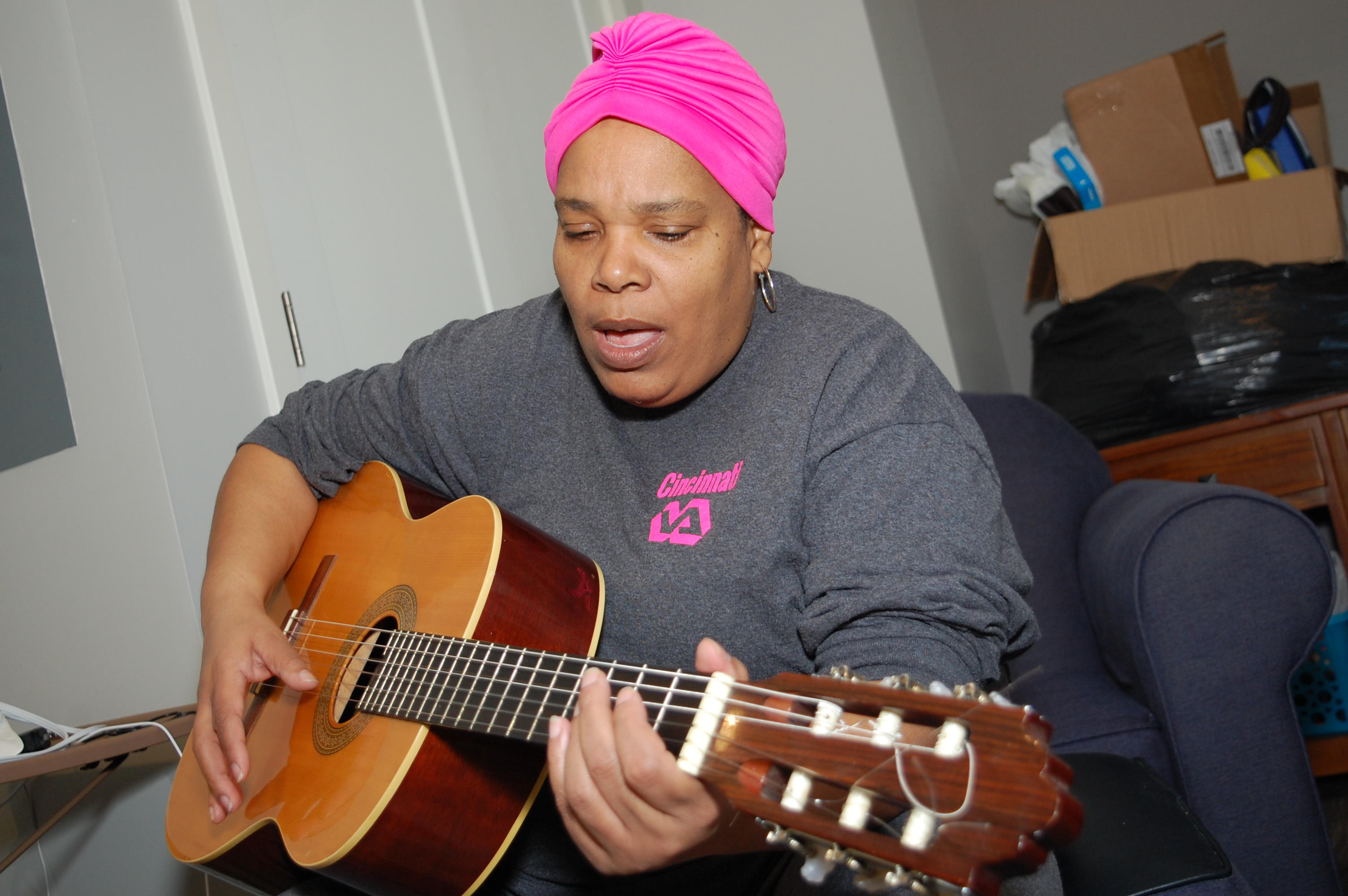 I am thankful for the support you are giving me and so many veterans like me. I am honored that you are willing to stand in the trenches for me when I need it.

So I say to you thank you.

With your support, we can help homeless veterans, like Jevette, continue their journey towards restoration and get back to doing what they love most.