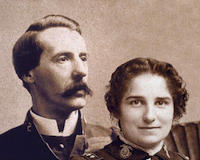 In honor of the establishment of the beloved nonprofit organization 117 years ago, Volunteers of America has declared March 4-8 Founder’s Week. We are taking this time not only to celebrate, but to reflect on our long history of serving those in need. As a supporter of Volunteers of America, you are part of a nationwide effort dedicated to uplifting those individuals and families who need help the most.

On March 8, 1896, in front of a crowd of 8,500 at Cooper Union in New York City, the Booths proclaimed the beginning of the new organization and vowed to “go wherever we are needed and do whatever comes to hand.” A post was established in Cleveland the same year, and Volunteers of America has been thriving ever since. To this day, we remain firmly dedicated to this mission and the commitment to serving those most in need.