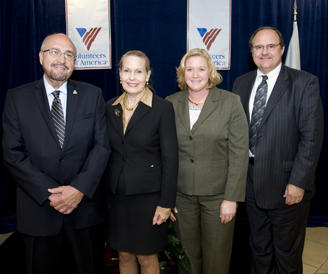 On May 24, 2012, Volunteers of America hosted the Opening Doors: New Hope for Veterans event at the Veterans Domiciliary at Wade Park in celebration of the one year anniversary of its opening.  The event focused on the importance of collaborative approaches to veterans issues, including involvement in the criminal justice system, post-traumatic stress disorder, traumatic brain injury and other mental health concerns.

"So many veterans tell stories of falling through the cracks. Mental health and legal problems make it that much harder to get jobs and ultimately, their lives back. By bringing together all resources and looking at different ways to solve problems, we can begin to eliminate barriers - to jobs, to housing, to meaningful lives. We can provide the type of timely, compassionate, high quality help these veterans have earned," says Dennis Kresak, Volunteers of America of Greater Ohio president and CEO.

It is through the leadership and collaboration of organizations like Volunteers of America of Greater Ohio, the VA and individuals like Justice Stratton that help ensure veteran heroes have the support they need to be productive members of the community upon their return. Continuous collaboration among government, health care providers, agencies and others providing services to veterans is necessary in order to continue making progress on issues facing veterans.