Under Construction: A Home for the Brave 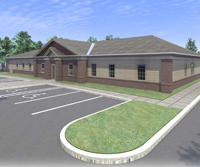 Construction is underway on a new home for struggling Cincinnati veterans. The $1.9 million Home for the Brave facility will provide transitional housing to 54 male and female homeless veterans as they work toward self-sufficiency through education, employment, substance abuse treatment and supportive case management.

The 17,500 square-foot facility, located in Mount Healthy, includes 54 single bedrooms, with a four-room wing for female veterans, a community lounge, recreation area, library, computer lab, full-service cafeteria and laundry and bath facilities. The facility is designed specifically to meet the unique needs of our veteran heroes.

The critical need for this program is highlighted by the recent second annual report on veteran homelessness. The U.S. Department of Veterans Affairs (VA) and the U.S. Department of Housing and Urban Development (HUD) jointly released the report as part of the national effort to end veteran homelessness by 2015. Although the number of homeless veterans has decreased since the first report, a staggering 144,842 veterans were still homeless last year.

“No veteran should have to spend even one night on the streets.” said Dennis Kresak, president and CEO of Volunteers of America of Greater Ohio. “We are so proud to be further expanding our services to the brave men and women who have served our country.”

According to VA and the National Coalition for Homeless Veterans, veterans become homeless because in addition to the complex set of factors influencing all homelessness – extreme shortage of affordable housing, livable income and access to health care – a large number live with lingering effects of post-traumatic stress disorder (PTSD) and substance abuse, which are compounded by a lack of family and social support networks. The VA and HUD report found veterans are 50 percent more likely to fall into homelessness than other Americans. The Volunteers of America’s Home for the Brave program will fill a critical gap in the continuum of care for the Cincinnati region’s homeless veterans.

The development of the facility is made possible through grants from the U.S. Department of Veterans Affairs and the Federal Home Loan Bank of Cincinnati’s Affordable Housing Program.  Financing is provided by Huntington Bank. Funding to support program operations will be provided by the U.S. Department of Veterans Affairs. Construction is expected to be complete by April 2012.